Tickets were issued from the start of organized transportation in the mid-1800's, and were at that time prolific by issuer and variety. Being made of cardstock, the older the issue - the lower the odds of survivability.

These are the actual fare tickets purchased to enter the various railways, whether they be located upon the street, on elevateds, and later the subways.

Most tickets could be purchased individually for a single ride, or in multiples for later use, hence many being of the perforated ticket book type, and almost always 2" long by 1" wide.

This would be the method that was kept in place until 1921, when the first turnstiles were adapted and placed throughout the system.

Incidentally, this gate as I have mentioned, separated the "paid" portion of the subway from the "unpaid" section and can be seen in the image above at left.

Inside the chopper box, and viewable through a glass window, was a set of interlaced metal teeth resembling combs. Connecting to these teeth combs, there was a shaft that connected through the side of the case to the outside. Much like the purpose of a modern paper shredder; only the chopper boxes were manually operated. The tickets deposited into the top portion, were chopped to prevent reuse and the shredded tickets contained in a hopper in the bottom portion of the chopper box pedestal.

A sub-set to the category of fare tickets, are the so called Bridge Tickets. These tickets were expressly issued for the surface or elevated lines that crossed any one of four bridges over the East River: Brooklyn Bridge, Manhattan Bridge, Williamsburg Bridge and the Queensboro Bridge (of which was known as Blackwell's Island Bridge and the 59th Street Bridge).

Before progressing to the bridge tickets used by the trolley and elevated lines, the following ticket issues must be discussed to avoid confusion.

Unfortunately, we are not quite to discussing the railroad ticket issues yet. Another source of confusion is in reference to the types of railroad operations themselves upon the bridge.

The bridge as designed, incorporated cable car lines across the bridge, and located in the inner most lanes of traffic, and directly flanking either side of the Promenade walkway. While it was intended to have the railroad opened for the grand opening of the bridge in May, difficulties concerning the grip mechanisms under the cable cars, meant cable car service could not start until September 25, 1883.

Furthermore, the cable system experienced frequent down time, such as sheave axles breaking; icy weather preventing good grip among other issues and the cable needed to be changed approximately every two to three years due to wear and fraying.

Once up and running, the tickets so marked "New York & Brooklyn Bridge Rail Road" (seen in the chapter below, and of which was in actuality a cable car line at first) are for the actual rail operations upon the bridge:

Many factors resulted in the cable car lines ultimately being converted to electricity in November 1896: the troublesome cable and sheaves, the smoke and soot from the steam boilers to power the machinery to power the winches for the cable, as well as ash and cinder removal. The cable and machinery was not immediately removed upon conversion to electricity, but it would be.

The location of the cable car lines in relation to the bridge deck can be seen in the following diagram. This is the original configuration of the lanes upon opening:

On January 26, 1908, Brooklyn Bridge "Local" service using Elevated "El" Cars between the two ends of the bridge was introduced. These electric cars operated in 5 car sets, and replaced the cable cars of the New York and Brooklyn Bridge Rail Road, which were discontinued the following day. Brooklyn Rapid Transit (and its subsidiaries Brooklyn Heights Railroad, ) would assume operation of the bridge railroad from this point on as well.

On January 23, 1898; the tracks of the Graham Avenue Line (a minor line approaching downtown from the east on Sands Street) was tied into tracks installed upon the bridge carriage way. As the line operated on 30 minute intervals, this line was chosen.

After this, multiple trolley lines began offering cross bridge service to and from Brooklyn, and merged into this set of trolley tracks for connection over the bridge to various points in Manhattan; and likewise, trolley lines in Manhattan into Brooklyn. Withing a few short years, automobiles would be arriving on scene and become commonplace, they would be assigned to the two outer lanes of traffic to share with both horse drawn vehicles as well as the trolleys.

Also, each bridge would have its own independent "Bridge Local Line" which in essence was a dedicated loop trolley operating from each bridges Manhattan Terminal to its Brooklyn or Queens Terminal.

On March 5, 1944; elevated car service was terminated across the bridge; what with passengers traveling between the boroughs opting to take 'one seat' subway rides across the river. So the trolleys were moved onto those tracks, and now allowing for two dedicated lanes of automobiles in each direction. The very complex Park Row and Sands Street Terminals were razed to allow for automobile on ramps and interchanges.

As such, the Myrtle Avenue Elevated was one of the last Elevated lines to connect to the Bridge railroad, so passengers could now receive a continuing ride ticket from the Myrtle El to BMT subway station at Bridge & Jay Streets and vice versa to continue into and out of Manhattan (Continuing Ride Tickets & Transfers)

Streetcar / trolley use of the bridge ended in March 6, 1950 and the once dedicated rail "lane" was converted to carry automobile traffic:

With that not-so-brief explanation of the Brooklyn Bridge rail configurations, we will now proceed (Yay!!!) to the fare payment methods.

As one can imagine, there are an abundance of tickets used for these bridge services and likewise, transfers to the extensive Brooklyn streetcar and elevated lines meeting at the Sands Street station and the Park Row Terminal in Manhattan..

The cable car "Railroad" fare tickets was originally five cents for a single ride when it opened in October 1883. This fare was reduced in 1885 to three cents for individual tickets, five cents for two tickets or twenty-five cents for a strip of ten tickets (thus the different numbers found in the center on the back of single tickets).

Connecting elevated lines at either terminal offered free transfer to the bridge elevated.

The December 28, 1895 edition of the New York Times carried this very interesting and informative piece on the bridge tickets. A veritable gold mine of technical information is contained. 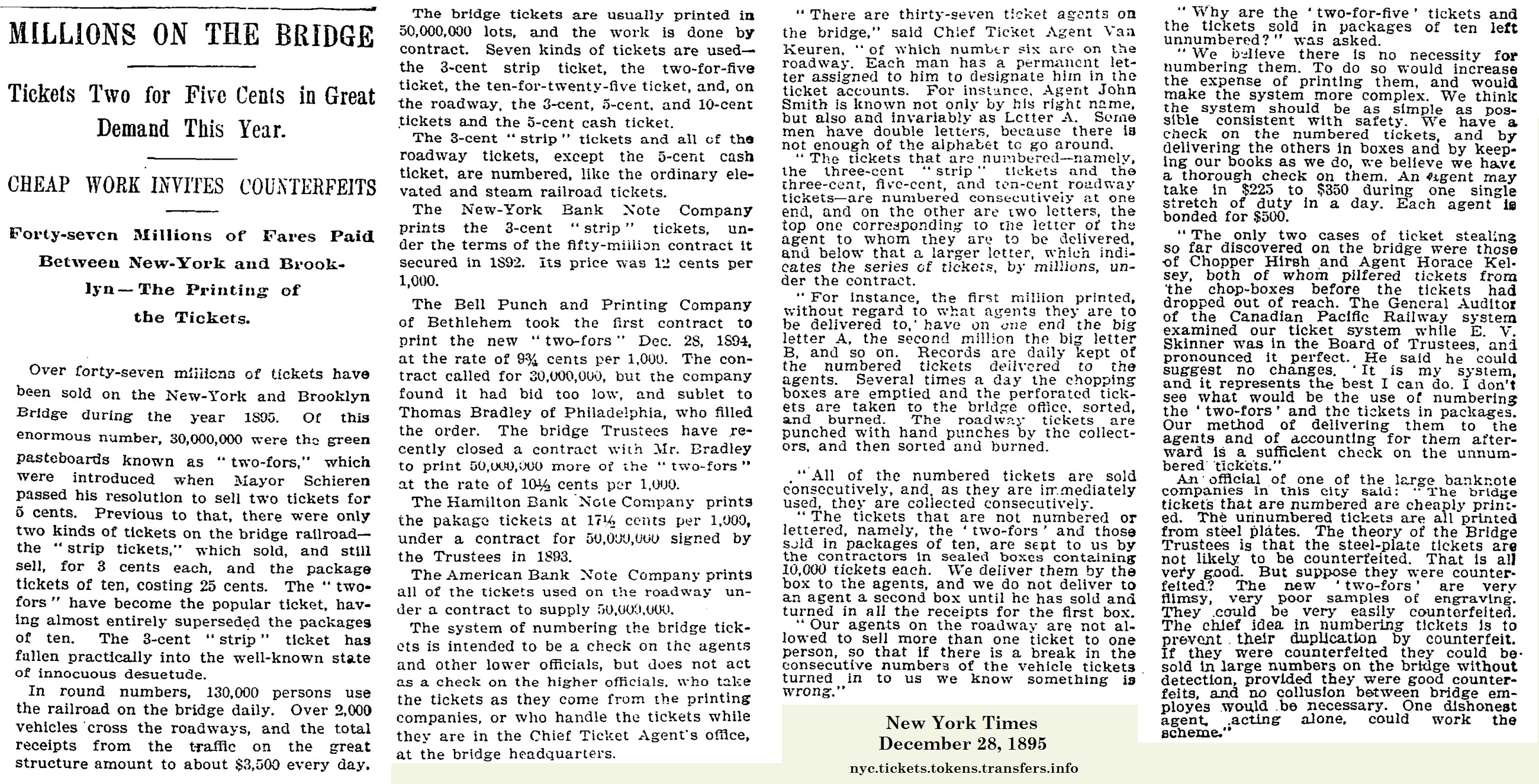 With this article, we learn the types of issues for the railway: 3 cents (or single ride), 2 for 5 cents (2½ cent tickets for round trip tickets), and 10 for 25 cents (commutation tickets for frequent crossing).

The companies contracted for the printing, quantities printed; collection and destruction methods. We now know the meaning of the large letters on the 3 cent tickets (the top letter was issued to one particular agent, the larger letter a series letter per each million tickets printed).

2½ cent tickets were issued for both for the Brooklyn Bridge elevated and / or surface lines, and the various companies that operated streetcar or elevated lines across the bridge.

These 2½ cent tickets were sold two for 5 cents and in multiples of two. The Bridge Division tickets were used on the elevated lines over the Brooklyn Bridge, until the elevateds were removed from the bridge in 1944. This elevated bridge line should not be confused with the streetcars / trolleys that also operated over the bridge, (and which remained as a means to cross the Brooklyn Bridge until 1950; at which time it became automobile only.)

Another of the DP&S acquisitions was the Bridge Operating Company, which began operated the Williamsburg Bridge "Bridge Local" trolley in March 1922. This line was City operated, as opposed to the previously mentioned lines which were privately owned.

The fare to cross the bridge was 1 2/3 cents, or three tickets for a nickel. How the tokens factored into this, it is not certain.

The Williamsburg Bridge trolley was replaced by bus on December 5, 1948, and the bus route was designated B39; and became part of the City of New York Board of Transportation.

The Queensboro Bridge Railway, was a franchise operated by the South Shore Traction Company. The fare when opened, was three cents one way or five cents round trip. In the first 11 months of operation, this line carried 1,678,576 passengers.

The track configuration of the Queensboro Bridge trolley had two unique facets. The first being the track layout was not of the conventional dog bone arrangement allowing endless circling of the cars, and of which could be operated from a single end throughout the entire day. The Queensboro layout, was it had a conventional half a dog bone at the Manhattan end consisting of several loop tracks.

But the Queens terminal ended into dead end stub track, where a trolley would pull in and the operator would have to change ends. This obviously required he energized trolley pole (which were always trailing in relation to the direction of car travel) to be pulled down and locked; and the pole on the former head end released up into contact with the trolley wire. Now the trolley would be ready to return to service and putt out on the westbound bridge track.

Queensboro Bridge Railway
These tokens were known to have been issued for the Bridge Local trolley, which used the outer lanes on the bottom deck of the bridge. An underground loop-track terminal on Second Avenue (Manhattan) to a loop track in Queens Plaza.

Tokens were used for discounted fares for employees of and volunteers at Coler - Goldwater Memorial Hospital on Welfare Island.

This next issue of token were sold at the Hospitals on Roosevelt Island at a half fare discount. They were valid for use only on the Steinway Transit route serving Welfare Island, which was the Q102 route, and replaced the 16mm brass employees token issued by Queensboro Bridge Railway..

In 1950, the fare for the transit system rose to 10 cents. These 10 cent denomination tickets are somewhat rarer, as these were only used for three years: 1950 through 1953.

This next ticket were issued under the auspices of the New York City Transit Authority. Its exact purpose is not known, as tokens were already in circulation, but obviously it was for general fare acceptance.

One of the benefits of being the spouse of a railroad employee, was being eligible for free travel. Obviously, the New York City Ominbus Corp thought it appropriate to continue this privilege.

These New York City Omnibus passes above are known as samples from Rand McNally.

Many years and varieties are known. Most are seen with damage in upper right corner of reverse, presumably from being detached from a salesmen's catalog or portfolio.
$6.00 - $7.50 each 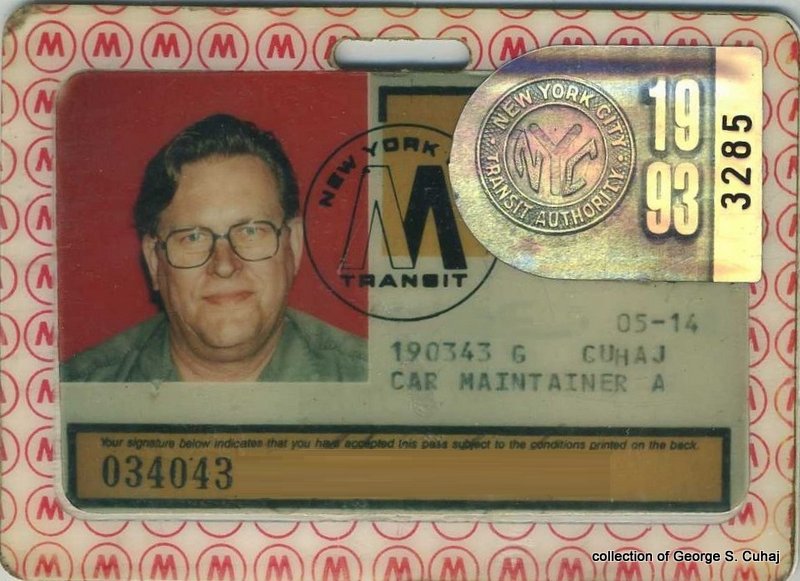 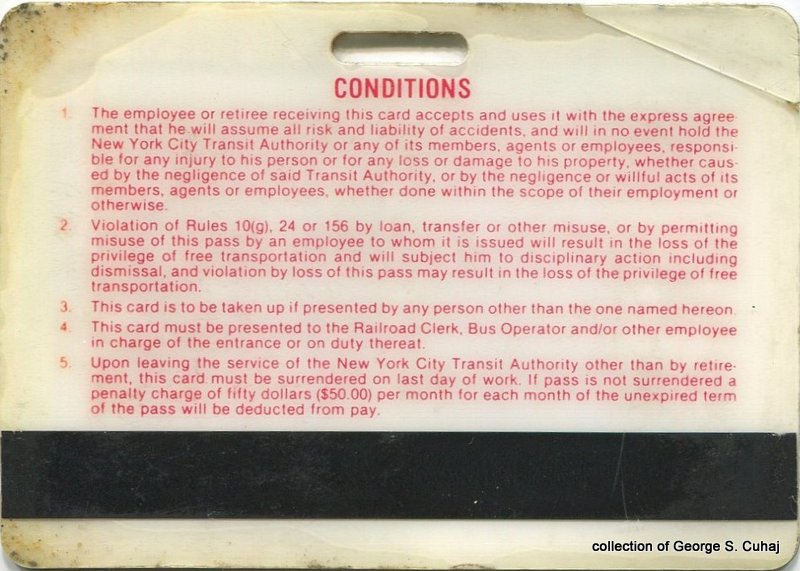 NYCTA Employees Passes are extremely rare as the NYCTA withhold $50.00 for each month remaining on the validity of the pass.
This pass has a magnetic strip but is not quite yet a MetroCard.
.