Before progressing into this chapter of surface transfers, it should be noted that:

Bus route transfers can be found on the next page of this website: Page 5: Continuing Ride Tickets & Transfers - Surface; Bus Routes

The purpose of transfers were used to make connections at the location of two or more intersecting streetcar lines or bus routes. Upon payment of the initial fare, you requested a transfer. Early transfers usually required an additional supplemental payment, i.e. 1 cents, on top of the initial fare of say 5 cents. In some cases, a new transfer could be purchased on a successive connection.

In some cases after the first unification on June 1, 1948; the first transfer was free on intersecting lines operated by the same company. Transfer to another companies car line usually required another small payment.

Some varieties, like the Smith Patent were divided into three parts, the center section containing the route it was initially issued upon, and the date issued. This center section also contained 12 boxes marked 1 through 12 (to denoted the hour) and a box marked for AM or PM which would covered a 24 hour period on the bottom.

The two end pieces (left side and right side) were used for second and even a third connection. These transfers were only issued upon payment of a supplementary fare on top of the initial fare.

Some varieties of ticket omitted the side stubs, had boxes for 4 to 12, a box for PM and a single box to denote 1 - 4 AM. This was because a lot of streetcar lines ceased operating in the wee hours of the morning.

A paying passenger paid the conductor / operator on the streetcar one initially boarded for your initial fare and the supplemental fare, and he punched the ticket with a ticket punch (as the conductors would for cash fare tickets on regular trains) and the conductor would give to you the transfer. Upon alighting at your next segment and boarding that car, you presented the transfer ticket to the conductor. He removed one of the end stubs. If you needed to ride on the third segment, you repeated this process at which time you were only left with the center section of the original transfer.

Before the first unification, there were two transfer formats: horizontal or vertical, and many different designs: Stedman Patent, Pope Patent, Smith and Moran among several others. It can even be observed that these designs evolved. The Pope Patent for example, is known in two types.

One of the more historically important of surface transfers, is the Stedman Transfer dating from 1900-1910. It was patented by John Harry Stedman of Rochester, NY. It featured a clock in grid form in 15 minute intervals, and 31 days and 12 months. With this type of transfer, a conductor did not have to carry a new date of transfer each day and the company could save on costs as one transfer would be good all year. The only discerning mark to differentiate it from other transfers was the Run Number.

In actuality, this was the second design of Stedman Transfer. Predating this version, was one with several different faces of people patented in 1892. The conductor punched the face that most closely resembled that of the paying passenger to prevent reuse by someone other than the paying passenger.

For the record, we have yet to witness this design having been issued for any transportation company in the City of New York or other boroughs.

This design did not go over too well for several reasons. First, there were too many varieties of people. Second, mostly everyone dressed the same, sported similar styles of beards, etc. Third, there was a lot of discontent amongst the passengers whom complained, "I beg your pardon, but sir, I do not look that way!"

John Harry Stedman also came to be famous for the pipe cleaner. Yes, that pipe cleaner; the fuzzy wire things most of us used in elementary school to make art. Originally they were all white, and when invented,  they were made to clean tobacco pipes, not art projects.

However, there were many types of transfers and are seen with the following legends:

The usage of the various types of transfers may have something to do with the fact a rider could purchase successive transfers on intersecting and connecting lines for a minimal fee (1 or 2 cents) and less than the initial fare of 5 cents. To better explain, a passenger boards the first trolley of his or her trip and pays the initial fare of say 5 cents. This is the "feeder line". Depending on the company and the route and upon request, the passenger could receive either a "Free", or a "Continuing Ride" transfer for 1 cent to the next line.

This style of transfer was also gradually adopted for bus routes as well; and spread throughout the 5 boroughs. It remained in use by the New York City Transit Authority until September 12, 1982.

Transfer Fares
A brief synopsis of the costs of transfers is as follows: surface line transfers from inception was 1 cent. Both the Brooklyn Rapid Transit and the New York Railway Co. raised the cost of a transfer to 2 cents on August 1, 1919 and surface companies in Queens are not mentioned.

On September 1, 1936, a free transfer policy was instituted on almost all surface lines operating in the Bronx.

On July 1, 1948 (the First Unification), the issuance of transfers were limited to just a single free connecting ride:

In 1958, the Fifth Avenue Coach Lines (Surface Transportation Corp) raised their cost of a transfer to 3 cents on top of a 15 cent fare, then to 5 cents for a transfer on June 10, 1961; and on February 2, 1962, eliminated transfers completely.

The following map, was published the Electric Railroads Association in April 1950. The ERA is a non-profit educational organization consisting of people interested in the history and progress of electric railways, and many of the New York City Transit Ephemera collectors have memberships in this group.

The map reflects the surface transit network of Streetcars in Brooklyn, NY as of April 1950. While the map itself is not a "collectible" in regards to transit fare ephemera, it does reflect the vast amount of connections and likewise, the surface transfers that were issued to continue a ride from one line to another; in a single borough of New York City.

You may click on the map for a large format file for in depth reference (use your back arrow to return you here). 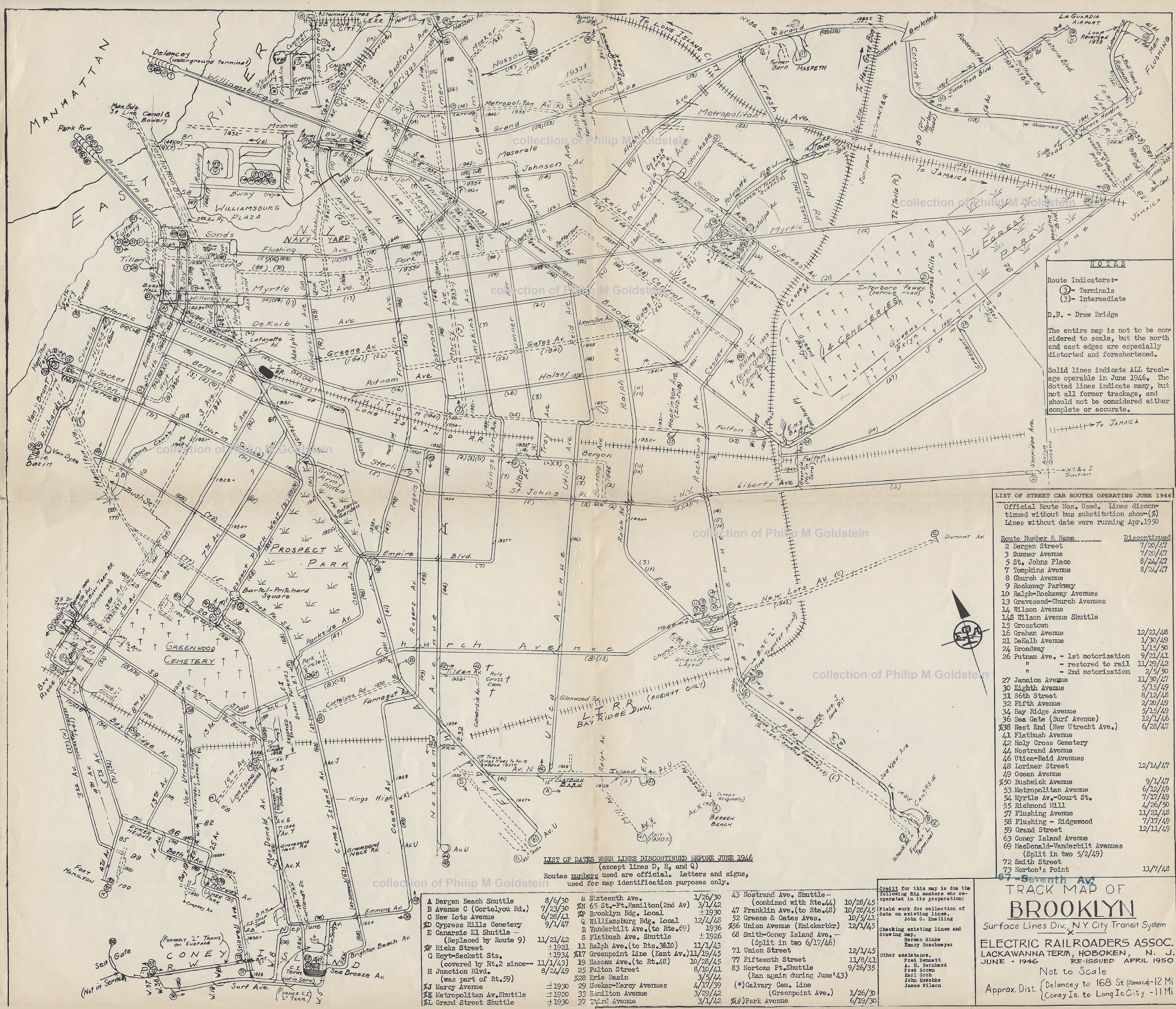 It is also not known why the Pope's Patent appear to be more scarce. Possible reasons may be short tenured company, non-renewal of contract, or unfavorable design. There was also a patent infringement case in 1912 involving Pope and the Cincinnati Railway, in which the design elements of the Cincinnati Railway ticket was infringing upon the design Pope time limit ticket, even though Cincinnati was the plaintiff and Pope was the defendant.

So this may have precipitated a complete change of design as well.

Pope Patent Tickets are also wider than their counterparts, being 2 3/8" wide as opposed to 2"


The following transfers feature the "standardized" design. They predate the first unification and started to appear in the mid-1930s. The actual date of their institution is uncertain, but it is believed to be November 1, 1934; and these were printed by Globe Ticket.

After June 1, 1940, the transfers had the "union bug" (union label) added to denote that the printing contract was performed by a union shop, with said printing falling under the Printing Specialties & Paper Products Union Local 495.

As such, you may see what appear to be duplicates of tickets below, but in fact show the pre-unification (B &QT) and post-unification versions (NYCTS).

As the tariff rules and specifications of the issuing companies remains unknown, (it is possible the documents survive in some archive, but where remains a guess); it is one endeavor of this author (PMG) to compile and discern all the varieties of transfers issued for a particular line and at least for the borough of Brooklyn. As you can imagine, this is no small feat.

Dates listed under line name are the first day of internal combustion powered buses. Therefore the last day of trolley service is day before. Those tickets issues on that last day are so noted.

Mostly common; issues above $2.00 to 2.50 for circulated to $3.00 with intact selvage. 25% premium for special dates, and those issued for Norton's Point, Station 1 and Station 2
50% premium for transfers issued on last day of service on that route.
Intact books are also quite common and not worth the sum of individual tickets, $15.00 - $17.50.

Smith Patent (and copies thereof)
mostly common; issues above $2.00 - $3.00 each, with 25% premium for special dates, 50% premium for transfers issued on last day of service on that route.

.
Smith Patent; Globe Ticket, and unmarked printers
mostly common; issues above $2.00 - $3.00 each, with 25% premium for special dates, 50% premium for transfers issued on last day of service on that route.

Many of the older transfers were printed on both sides, with warnings on the back, whether it be unlawful use of a transfer, or beware of counterfeit money.

However, many carried advertising for local businesses as well as the more prominent stores such as Abraham & Straus.