These issues are commonly called transfers, and date back to 1800's. Certain companies encouraged passengers to use their own line, as opposed to a competing company within a few blocks, so they encouraged your continued patronage with a transfer. They usually cost 1 or 2 cents extra to purchase (but several cents less than an initial fare) on top of your regular fare for the first segment.

As competition grew, the transfer would be offered for free.

In certain cases, a reciprocal agreement with another streetcar line offered additional versatility.

Transfers & continued ride tickets issued from travel on surface lines connecting service lines, will be addressed on the next page of this website.

Also known as "inter-division transfers". The first unification brought subway lines and elevated lines under one parent organization, but physical connections did not exist because of their being from separate entities prior to the unification.

So paper transfers were issued upon request when and where a direct physical connection or passageway did not exist, to transfer from one line to another other, or from the rapid transit division to surface division, without having to pay a fare again.

Both small and large format tickets are known with coinciding dates, as they were used concurrently with each other. There were two methods of dispersement:

Large format tickets were issued at the request of a passenger upon request from a change / token clerk. These resemble the surface (streetcar & bus) transfers.

Small format tickets (resembling movie or bakery tickets) however, were dispensed from a coin operated ticket machine mounted on the wall near the exit of the "paid" (secure) portion of rapid transit stations and were self-service.

Tourists and infrequent users often overlooked the ticket machines; but regular passengers were “in the know” and these ticket machines were very convenient, as you didn't have to stand in line at the token booth to get a continuing trip transfer - you just deposited a coin or two in the machine, pulled the knob, grabbed your ticket and away you went.

How they were obtained from the surface sources is not yet known, but presumably from the bus operator. At the beginning of their use, continuing ride tickets were sold for 2 cents each.

This large format continuing trip ticket below is also a reciprocal issue to the Franklin Avenue Continuing Trip Ticket in the Second Unification chapter below.

Small format transfer tickets were first introduced on Thursday, July 1, 1948, and used system wide. Use of these tickets ended on July 1, 1952; when the Board of Transportation decided it was losing too much revenue with these rapid transit / surface line transfers. (Once formed, the New York City Transit Authority would resurrect the tickets in an extremely limited capacity.)

As the bus or trolley fare (7 cents) did not cost the same as a subway / elevated fare (10 cents), which is something a lot of modern day transit buffs have forgotten about. And the Fifth Avenue Coach Lines / Surface Transportation Bus on Fifth Avenue cost 12 cents and charged 2 cents for a transfer, which while it operated along side City owned bus lines, it charged more.

Making matters even more confusing, a transfer from a privately operated surface line (trolley or bus) like those operating in the Bronx or Queens to City owned rapid transit cost 6 cents (1 cent more than from a City owned surface line).

The above only applies to subway to surface or surface to subway transfers, NOT surface to surface. For those prices, you will need to refer to the "Transfer Prices" chapter on Page 4: Continuing Ride Tickets & Transfers - Surface; Streetcar Lines:

Why a vending machine?

This coin operated dispenser method alleviated the necessity of people having to stand in line at a token booth, where such individual transactions could take several minutes depending on the quantity of tokens purchased, the amount tendered and the amount of change in return to be counted, and when required, information or directions to a destination. As we all know, these lines could get quite long, especially at major route junctions and at peak travel times.

The institution of these coin operated ticket machines garnered major coverage in the Sunday, June 27, 1948 issue of the New York Times and from this article:

Despite looking all similar and random; there is a system to these tickets and they are hardly random.


As it would be a very unusual occurrence to have the same numerical day fall on the same day of the week in a single calender year, there was little risk of a unscrupulous passenger attempting to use a ticket not for issue date. For instance: a ticket purchased on June 6, 1950 (a Tuesday - orange) and attempting to be used on July 6, 1950 would not work as July 6 fell on a Thursday - (purple), nor could it be used in August 6, (which fell on a Sunday (gold),  The next date where the sixth day of the month fell on a Tuesday ticket (orange) would not be until February 6, 1951, some 8 months later!

In short, the color coding for day of the month was a relatively secure method of dating tickets without the need for printing a full date.

All tickets above as individuals; available regularly and in variety on eBay. Pay no more than $5.00 to $8.00 each.
Some stations are known in unsold remainders of rolls or strips of tickets from rolls for a specific date.
Any large collection of a variety of these tickets (different dates and / or stations) should be considered and priced accordingly on the merits of convenience, variety and quantity. 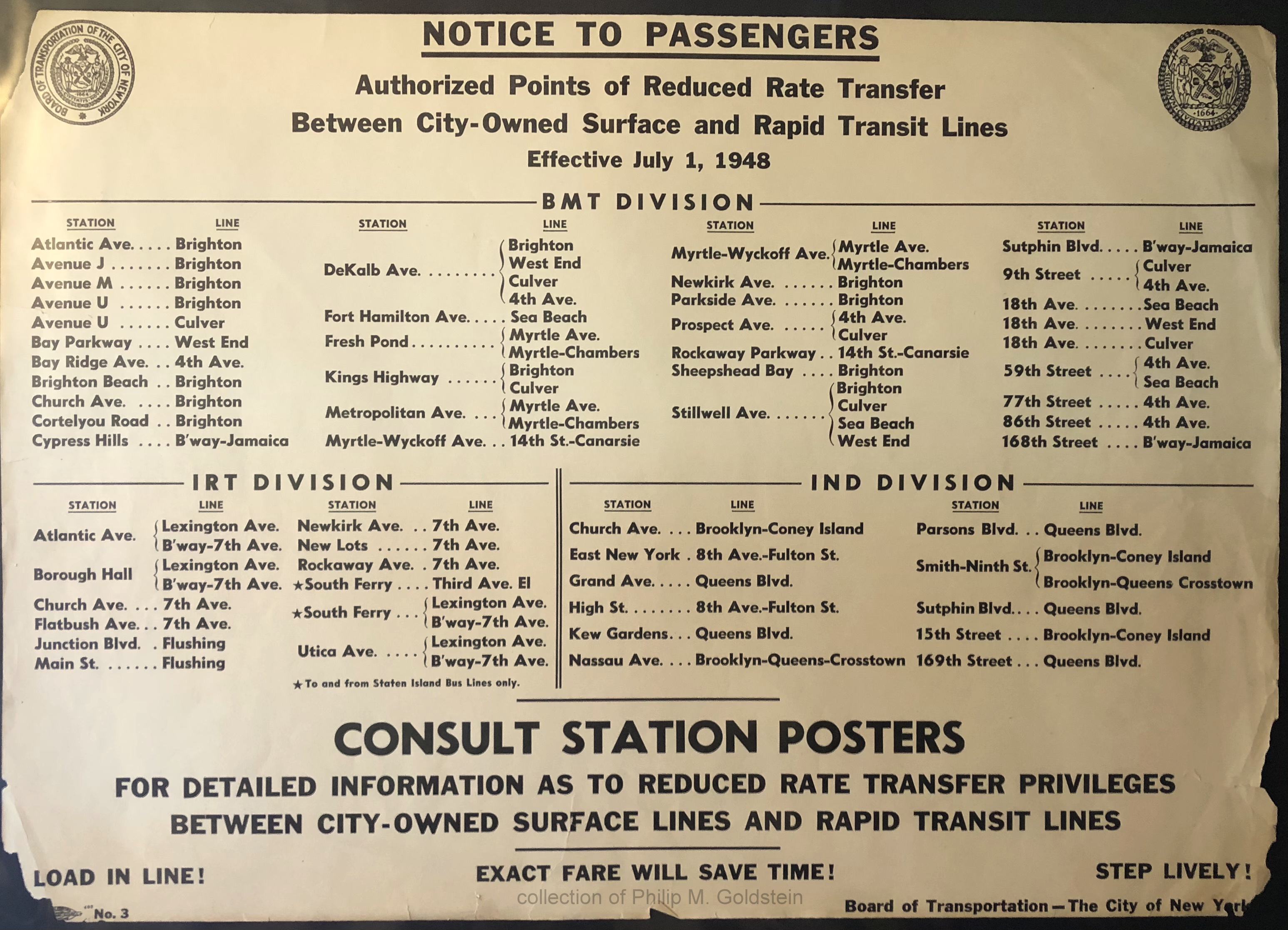 All tickets above as individuals; available regularly and in variety on eBay. Pay no more than $5.00 to $8.00 each.
Some stations are known in unsold remainders of rolls or strips of tickets from rolls for a specific date.
Any large collection of a variety of these tickets (different dates and / or stations) should be considered and priced accordingly on the merits of convenience, variety and quantity.

This section below is a master station set of New York City Transit System transfer tickets assembled by George W. Schroder of New York City starting in July 1948 and extending through 1951.

The collection noted the overprint colors for the seven days of the week in addition to paper varieties only used in March 1950 and 1951 (a change from white to buff). Several stations include form varieties when a bus service changed, and thus the ticket text needed to be changed.

This collection starts with a generic system wide issue for each division which can be used anywhere in the applicable division; then continues with the specific station issues for each division. This then repeats for Surface Line to Rapid Transit tickets.

With this issue of small format tickets, the use of the colored ink overprint to denote the day of issue was eliminated, and the color of the ticket stock would now be used to denote day of issue.

All tickets above as individuals; slightly more difficult to obtain than the regular rapid transit issue in the chapter above this one. Pay no more than $10.00 to $12.50 each.
No complete sets other than this one known. Any large collection of these tickets should be considered and priced on the merits of convenience, variety and quantity.

All tickets above as individuals; slightly more difficult to obtain than the regular rapid transit issues in that chapter. Pay no more than $11.00 to $13.00 each.
No complete sets other than this one known. Any large collection of these tickets should be considered and priced on the merits of convenience, variety and quantity.

Up until this time, the city government had leased the IRT, BMT, and IND Divisions of rapid transit (subway & elevated) lines and the surface system (buses and, until 1956 street cars). The major goal of the formation of the NYCTA was to remove transit policy, and especially the setting of the transit fare, from the politics of City of New York.

This 1953 re-organization is known as the Second Unification.

These tickets, as with the large size variety; these are also known as "inter-division transfers", however there are less stations issuing tickets in this format, for two reasons:

1) Subway to bus transfers were phased out, and;
2) Subway to subway transfers eventually were eliminated, as the underground passageways for direct transfers were constructed now that the three subway operators (IRT, BMT and IND) were unified under one parent organization.

As a new connection opened for use, the necessary ticket was eliminated. Naturally, construction of these passageways took time.

These Second Unification tickets are easily distinguished from their First Unification counterparts, as the design and typography is "cleaner" and easier to read sans-serif type face.

Unfortunately, a Master Station Set has not be seen, to provide us a comprehensive display of issues. So, these will be added to this chapter as they are procured or seen.

One niche of collecting continuing ride tickets, are those from the last day of service.  The Third Avenue Elevated appears to be the most fondly remembered of the elevated lines  (Second, Sixth, Eighth, Ninth, Myrtle Avenue).

Until 1968, there was no direct physical connection between the two stations, so passengers who needed to transfer between the two lines, were required to obtain this ticket from the token clerk on the #7 Line - Fifth Avenue station, then exit up to the street and walk one city block west, where they would then descend and enter the 42nd Street Station and surrender it to the token clerk, which would allow them to access the Sixth Avenue Line subway.

These tickets were available in separate AM and PM formats on Mondays to Fridays from December 18, 1967, until 1968 when at that time an underground tunnel was completed to permit passengers to transfer without hindrance between the two subway lines.

These next two issues are reciprocal to one another. They are continuing ride tickets issued to passengers of either the IND Fulton Line

, and thereby connecting with the Brighton Line , currently the

lines; at the Prospect Park Station; or vice versa.

The use of subway line bullets on a bus style transfer had not been witnessed before acquisition of these examples, and are quite interesting to say the least.

With the exception of Block and General Order Tickets, these two are in all likelihood the last interdivisional paper transfer issues for the New York City Transit System and prior to the Gold Metrocard which incorporates a two hour time frame for non-physically connected interdivisional transfers.