There were many instances in which the New York City Transit Authority issued tickets for special occasions; some one off event and others repetitive.  Some were sporting events, and some on these occasions were to garner more revenue during weekdays or late nights. As most of the passenger traffic was during morning or evening rush hours on weekdays, a lot of transit equipment sat idle during the off hour periods. Obviously, this equipment cost money to purchase, as was the employees hired to operate the equipment; so having either sit idle was not financially sensible.

So, the NYCTA operated "specials".

The most widely known of these special tickets was for the JFK Express. This service was heavily advertised on broadcast television and radio. The slogan, which a lot of people remember to this day was "Take the Train To The Plane".

This special but scheduled service was assigned its own "bullet" on the roll signs on the subway and bus equipment: 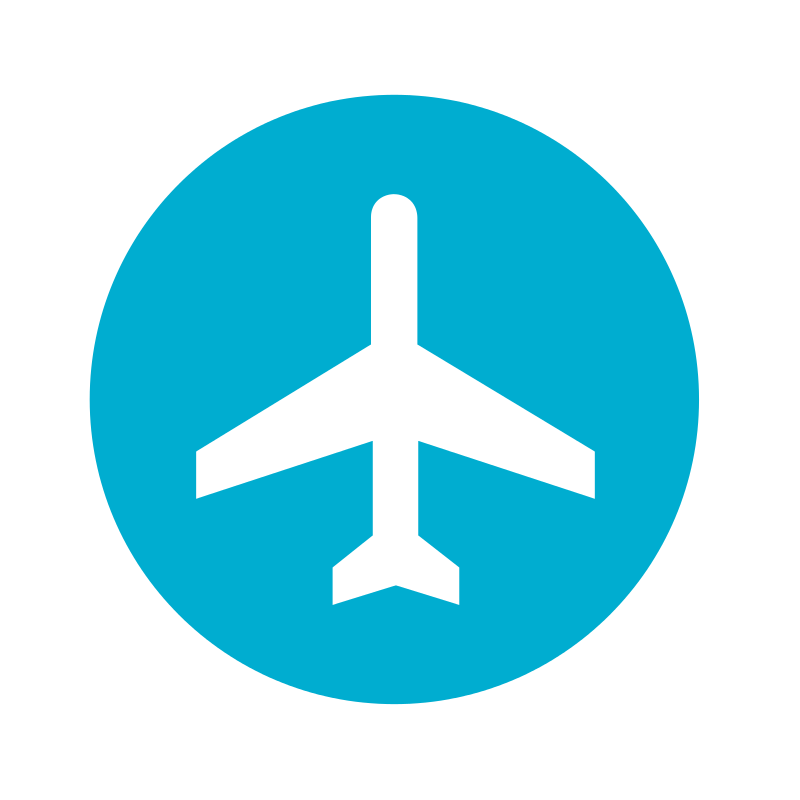 Unissued books of JFK Tickets in varying denominations are now appearing on the eBay market.

Sports Tickets are not encountered often; $25.00 in good condition. Note that football ephemera collectors are also in the market for procuring these issues.

The Nostalgia Special was a once-a-day weekend train running from spring to fall on Sundays, with summer expansion adding Saturday service.
The BMT triplex units were used (see car card advertisement later in this section) mostly for this service.

The Nostalgia Special ran from 57th Street and Avenue of the Americas (Sixth Avenue) to the Transit Museum at Court Street, and laid over for about two hours to allow passengers a visit the Museum. Passengers then re-boarded and the train went out the Rockaways, again with a short layover. It then returned with a stop in Brooklyn and at 57th Street and Avenue of the Americas.

The fare on the ticket included the fare for the Nostalgia Train and admission to the Transit museum.

After a pause in running the Nostalgia Specials the NYCTA began running other historic equipment on short segments in regular service with no extra fare such as Holiday Trains, Baseball Specials, Queens Day Specials. Often the R-1-9s or the "Train of many colors" are used in this service.

Block tickets are issued for unplanned temporary interruptions of service due to fire, flood, derailment, signal problems, or power outages.

This ticket allows a passenger of whom has already paid their fare, to alight from a subway train, exit the paid portion of the system and reenter at another location to take an alternative subway line or bus instead, without having to pay a second fare..

Good for 48 hours (seldom marked with time). The meaning of the letter codes is currently unknown - if you know please send me an email .

Whereas the Block Tickets above are issued for unplanned temporary interruptions of service, General Order Transfers are issued for planned prolonged outages or rerouting due to construction or reconstruction.

The Culture Bus Loops allowed a passenger to disembark and visit museums and places of interest along the route, then reboard a later bus to continue their journey to their next destination pretty much door to door. This allowed passengers greater flexibility than having to walk several blocks to a subway station, make a transfer to adjoining line, et al; then walk back to their next destination..

As an added bonus, it also explains the other discounted special services such as the Sunday Half Fare, Add-A-Ride, Shoppers Special, and Nightcoach programs (as shown on this particular page and on others in this website); so without a doubt this brochure was worthy of display.

The Culture Bus Loop I ran in Manhattan, and for the price of $1.00 a Culture Bus ticket was issued to the passenger. This Culture Bus gave the passenger access to dozens of New York City's Museums and Tourist Attractions as listed in the above brochure.

There was also a Culture Bus that operated in Brooklyn. This was known as "Culture Bus II" and ran the route of the B88:

There was a third culture bus route, the Culture Bus III. This route was located in north Manhattan and the Bronx. However, this route was extremely short lived, and only operated from August 3, 1974 (some sources erroneously cite Memorial Day weekend - but the NY Times article at right states otherwise) through September 2, 1974 - Labor Day; at which time this special route was discontinued, and never reinstated.

This loop route was designated the Bx56.

To date, tickets for this route remain undocumented. 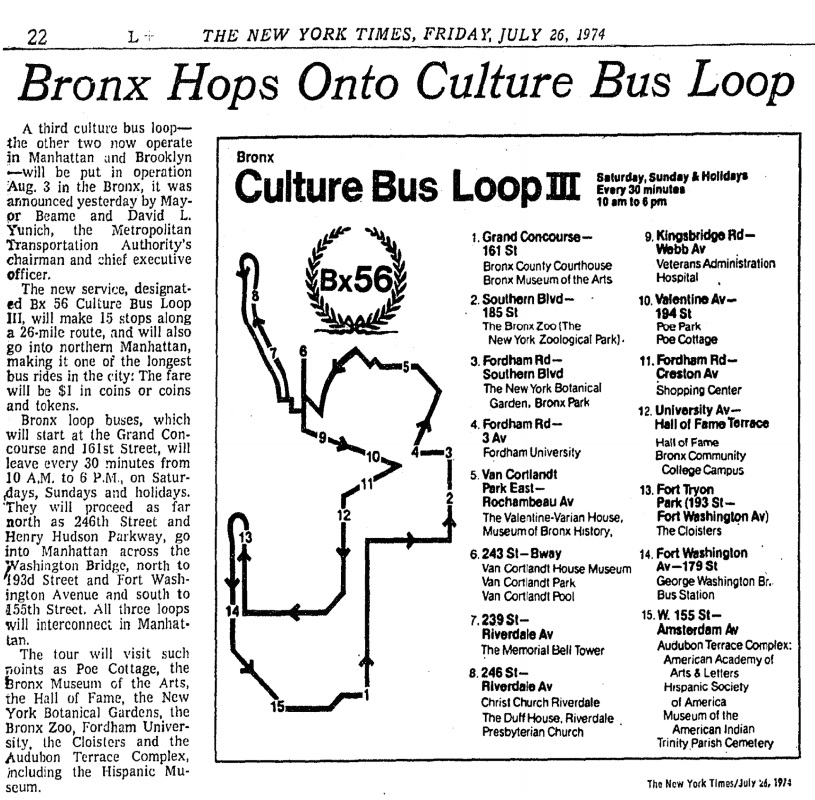 In an attempt to drum up business during the midday, when bus occupancy is at its least, the NYCTA advertised for and ran "Shoppers Buses." This was a bus that ran a fixed route throughout the Manhattan Shopping District. With the purchase of a ticket, the passenger could get on or off the bus on that route however many times they chose, to do their shopping in an endless number of stores.

A Night On The Town