Where to Stay, What to Do, Where to Eat, and Where to Drink in San Diego without a car,

Gallery Quality prints of these photos are available at MoKnowsPhotos.com or by contacting Carl at his e-mail above.

When I think of a nice city to take a train trip to, San Diego, California, immediately comes to mind, with its "perfect weather."

United States Weather Bureau describes San Diego's weather as the closest thing to perfect in America. Holiday Magazine described San Diego as the "only area in the United States with perfect weather." Pleasant Weather Rating Service Poll voted San Diego as the best year-round weather in the nation, and the second best in the world. [Las Palmas, Canary Islands, comes in first.] 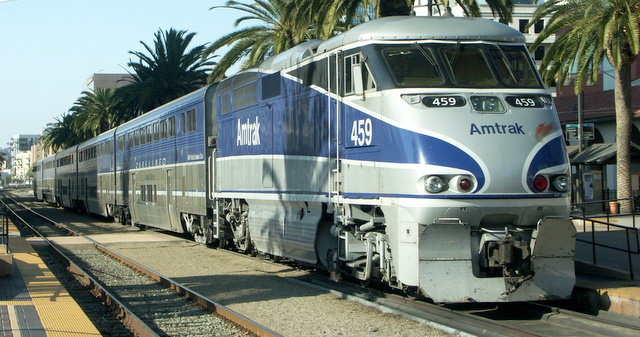 Take the Amtrak Pacific Surfliner (above).  It picks up passengers from as far north as Paso Robles, California, including Santa Barbara, Los Angeles, Fullerton, Oceanside, and many other stops along the way, much of it an ocean view, to the final destination of San Diego.  The Surfliner follows Hwy. 101 most of the way and just watching the automobile traffic while you ride the train makes the cost of the ticket worth it.

For getting around San Diego, the Red Trolley (below) is your best bet.  The America Plaza Terminal is just across the street, east, from the Santa Fe Station.

The Pacific Surfliner, Coaster, and Trolley all stop at the Santa Fe Station.

We chose the Best Western on Ash Street, because you can walk from the San Diego Santa Fe Station to the hotel, or they have a van that makes the trip regularly.

To walk to the hotel, when you detrain, do not go into the Station.  Stay on the platform and walk north until the platform comes to a cross street, that will be Ash.  Turn right and walk 2 blocks to 555 West Ash.  You will see the Best Western sign high on the 14-story hotel (10 rooms per floor) from the platform.

Free Wi-Fi in the rooms (ask at the desk for the logon and password).  Free hot breakfast in the restaurant in the same building.

I had gone online ahead of time and found that a number of photography exhibitions were taking place at various venues all in Balboa Park.  Ask at your hotel's  desk as to where to catch Bus 7 to Balboa Park (one stop before the Zoo).  Check to see if the San Diego Padres are playing baseball at Petco Park.

Balboa Park was the location of the 1915 Panama-California Exposition and 1935 California Pacific International Exposition.  Each created architectural landmarks for the Park.

Balboa Park's site was placed in reserve in 1835, and so is one of the oldest sites in the United States dedicated to public recreational use. Besides open space areas and natural vegetation green belts, it contains a variety of cultural attractions including many museums, theaters, gardens, shops and restaurants, as well as the world famous San Diego Zoo.

Shots inside the arboretum

Little Italy's southern border is Ash Street.  Walk to India St., just one block from the hotel, and turn north.  Little Italy takes up about 5 or 6 blocks.  Many Italian restaurants line both sides of the street.  We asked locals which restaurant they'd recommend and they all said, Fillippi's (1747 India Street
San Diego, California 92101  Phone: (619) 232 - 5094).

We arrived about 6 pm and enjoyed a fantastic, authentic Italian dinner.  As we left about 7 pm, the line was through the market and out the door onto the street!  Since we walked, there was no parking problem, nor valet parking fees!

"Top of the Hyatt"- 40th Floor Lounge, with a great view of San Diego Bay, opens at 3 PM.  Find the Concierge and ask which elevator goes to the 40th floor.  Take the Orange Line Trolley to the first stop south of America Plaza and you will see the Hyatt across the intersection.  Or stay on the Orange Line Trolley farther to Petco Park to "Wine Steals" just outside the entry fence at Petco Park.

Top of the Hyatt

Terrific Views from the "Top of the Hyatt"

So, Take the Train to San Diego, then the Trolley to Eats, Drinks, Hotels, and Entertainment in a fair weather city.