(Click any image for a larger copy; Click BACK in your Browser to return to this page.)

The last leg of this dream train trip covering 25 states on 6 Amtrak Long Distance Trains with 7,638 rail miles was to take the Sunset Limited 1,995 miles from New Orleans back home to Los Angeles, California.

The map above is from http://sharemap.org/public/Amtrak_Sunset_Limited#!flash and you can zoom on any portion, right down to street names.


This was what I like in a two-night train trip in a roomette.  Leave at 9 a.m. (not in the middle of the night like we had in Charlotte).  Arrive first thing in the morning, in time to take our 35 minute ride out to our home station Fullerton, California. 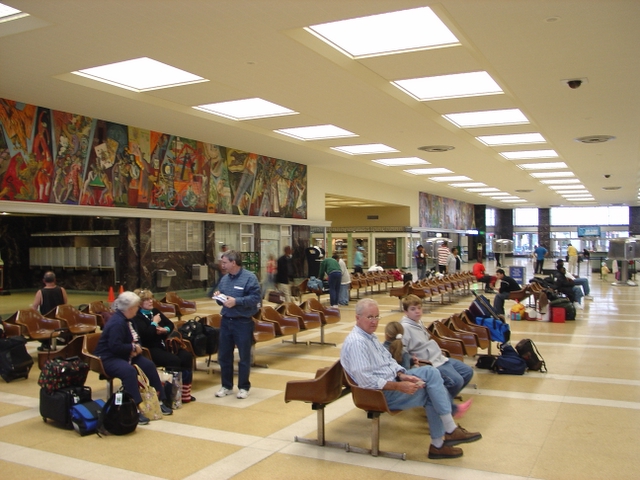 The photo above was taken about 2006 when we were in New Orleans, arriving there on the City of New Orleans.  That report is at:  http://trainweb.org/carl/RailsToRiverboats/

As the morning sun hits the east side of the Mercedes-Benz Superdome, we head west.

and past the nearby Smoothie King Center.


The Smoothie King Center is a multi-purpose indoor arena in New Orleans, Louisiana. It is located in the city's Central Business District, adjacent to the Mercedes-Benz Superdome. The arena opened in 1999 as New Orleans Arena and has been home to the New Orleans Pelicans of the National Basketball Association (NBA) since 2002.  The New Orleans VooDoo of the Arena Football League played their home games in the arena from 2004 until the team disbanded in 2008. The VooDoo resumed play at the arena in March 2011, until after the 2015 AFL season when the franchise folded.

I-10 built above flood plains, but railroads still suseptible to high water.

The Huey P. Long Bridge, located in Jefferson Parish, Louisiana, is a cantilevered steel through truss bridge that carries a two-track railroad line over the Mississippi River at mile 106.1 with three lanes of US 90 on each side of the central tracks.  Opened December 1935.  The bridge now consists of three 3.3-meter (11-foot) lanes in each direction, with inside and outside shoulders. Prior to the expansion, there were two 2.7-meter (9-foot) lanes in each direction with no shoulders.

Huey P. Long bridge combining I-90 and the railroad.

Barges and unloading docks in the Mississippi River mile marker 106.1

Telephoto shot of New Orleans from the Sunset Limited west of town on the Huey P. Long Bridge. 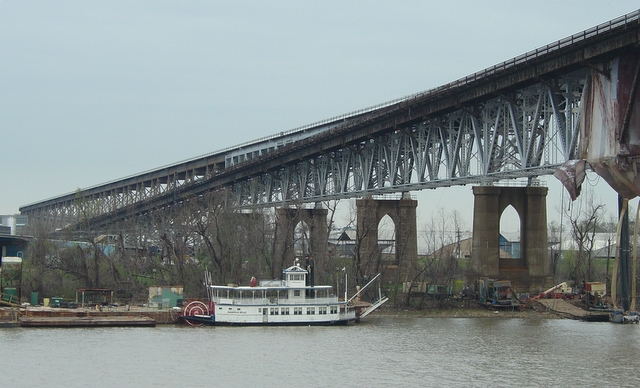 Photos above and below the Huey P. Long Bridge that I took from a river barge about 2006.

Fire station below the Huey P. Long Bridge.  I wondered about the involvement of this station during Hurricane Katrina.

You can see the proximity to the Mississippi River.

Typical scene of Louisiana bayou with Spanish Moss on the trees.

Business by a waterway


Today, Louisiana sugarcane yields range from 30 to 50 tons per acre, with recoveries ranging from 180 to 240 pounds of sugar produced from each ton of cane. These sugar levels rival yields obtained in the more tropical sugarcane-growing regions. That's why sugar continues to be a major part of the south Louisiana economy.

LDRR operates over 114 miles of branch line in southern Louisiana between Lafayette, Louisiana and Raceland, Louisiana, with most of the lines near US 90. LDRR operates via trackage rights on the BNSF Railway. LDRR traffic generally consists of bauxite ore, carbon black, fertilizer, molasses, oilfield supplies, paper products, pipe, sugar and rice.

The lines were built between 1880 and 1890. LDRR started in 1987 with the sale of seven Southern Pacific lines to Genesee and Wyoming.

Lots of water in Louisiana, with US 90 always nearby.

US 90 bridge from Morgan City to Berwick, Louisiana

Evidence of oil production in those tanks in Westlake.

Could be a former rice Co-operative elevator.

Egrets in the pine trees.

We had a new baggage car in our consist.

Our car attendant, left, was on this run for the first time from his regular run on the City of New Orleans.
He worked hard to learn the job and do a good job.

Knowing many hurricanes come out of Texas, I thought this cloud bank might be brewing up one.

The last car in an Amtrak train is a good place to capture railroad activity.

With a stop such as this with an hour in the station for crew change, etc. it gives you time to stretch your legs and take some exterior photos of your train.  It is hard to take a photo without the setoff "Amtrash".

I noted the irony of an American train with Japanese support vehicle.  I do note that these tractors are made in Gainesville, Georgia.

Seldom is the locomotive this close to the city sign.

We headed south of Houston on a detour because of track work.

The next day, we were in typical Southwest terrain.

Isn't that the same elephant cloud I saw north of New Orleans?

Rain in the desert.

Some beautiful southwest scenery from the upper level of a Superliner on the Sunset Limited.

Appropriately, our last night on the Sunset Limited had a spectacular sunset.

Since we arrived back in Los Angeles about 5:25 a.m., once we hit the rack after dark in Arizona, there were no more photos until we got home.


Amtrak Guest Rewards and Amtrak ticketing seem to be two separate and unrelated systems.  After arriving back in LA at 5:25 a.m., with a 7:25 a.m. train back to Fullerton, I went to the Metro Lounge to see if there was an earlier train to Fullerton, 1/2 hr. away.  The lounge attendant called and handed me the phone.  Yes, there was a 6:08 train to Fullerton, but there would be a points deduction to cancel my current reservation and change it to the earlier train.  Forget that, I decided to stay in the Metro Lounge for those 2 hours, enjoy the amenities, including clean restroom, and Matt brought in Starbucks from the in-station store.

As I expected when I began this train trip covering 25 states on 6 Amtrak Long Distance Trains with 7,638 rail miles, it was a trip of a lifetime.
Son Matthew and I had both accumulated over 40,000 Amtrak Guest Rewards points and this trip consumed all our points.  His points were accumulated by trips into Los Angeles where he was a pipe organ repairman for a year.  I accumulated points from Amtrak Guest Rewards Points sales and an Amtrak credit card.  Contacting hotels in the five destination cities provided hosted of discounted accommodations in return for an evaluation and photos in this report.  I also contacted a city tour company in each city for a hosted tour.  As you have seen at the end of each train or destination page in this report, we used Uber extensively always having a low-cost, excellent experience. Thanks to Bob Williams, a friend for over 50 years, for showing us around Chicago for three days.  Thanks to brother Don Morrison and wife Suzanne and their daughter Beth Weast and husband Robbie and newborn Keller for hosting us in Charlotte. Finally, thanks to Steve Grande, owner of TrainWeb.com, for hosting these rail journey webpages as well as over 100 other rail reports since 1998 at TrainWeb.org/carl.

We used Uber in all 5 cities. Here's a free Uber ride (worth up to $20) on the Uber app
To accept, use code 'carlm3106ue' to sign up. Enjoy!
Details: (The code will already be entered) https://www.uber.com/invite/carlm3106ue

Top of this page

Please look at the Sponsors of this trip and the Tips and Tricks of Amtrak Travel.

Back to the Table of Contents of "America by Amtrak"