America by Amtrak, Coast-to-Coast and Border-to-Border

(Click any cropped image for a larger copy; Click BACK in your Browser to return to this page.)


This is the 4th leg of my son, Matthew Morrison, and my "America By Amtrak" Tour.  This Carolinian segment, which left Washington, DC at 10:53 am, includes photos from the train of Alexandria, VA; Quantico, VA; Fredericksburg, VA; Richmond, VA; Petersburg, VA; Rocky Mount, NC; Wilson, NC; Selma, NC; Raleigh, NC; Cary, NC; Durham, NC; Burlington, NC; Greensboro, NC; High Point, NC; Salisbury, NC; Kannapolis, NC; Charlotte, NC;  and forest, farms, and rivers in between.  We would leave Charlotte on the Crescent.  If you missed the earlier sections of this report, click here:  "America by Amtrak". 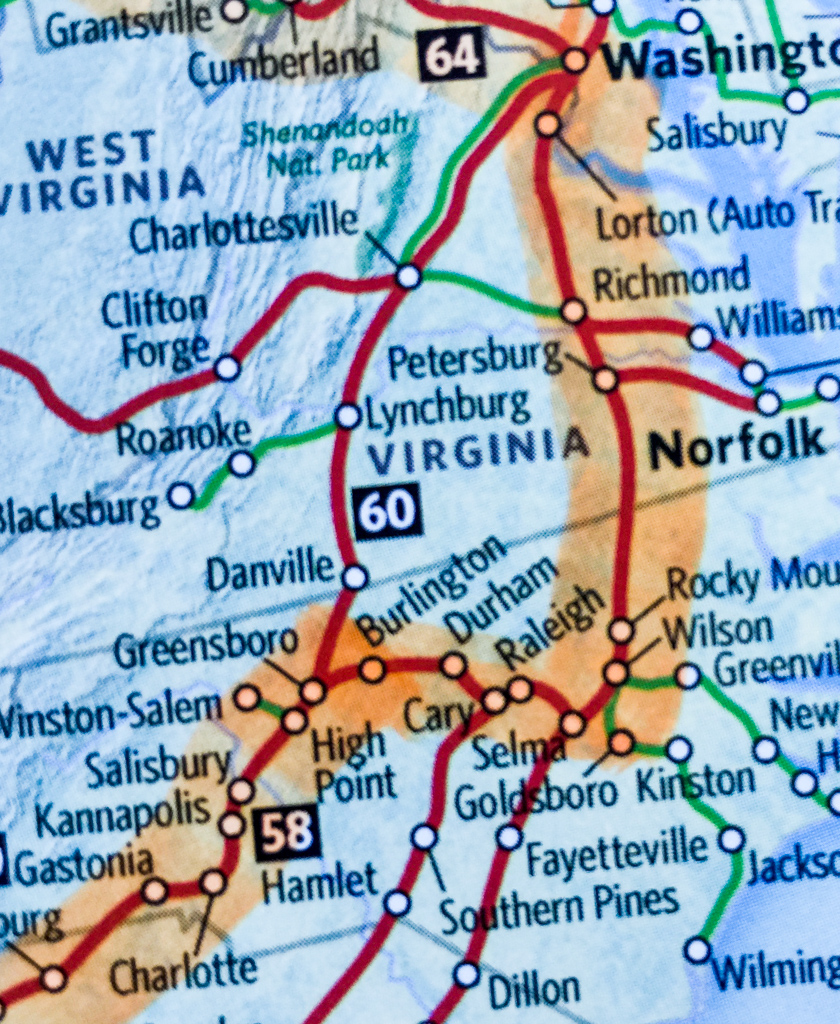 We returned to Washington, DC Union Station (above) by Uber from our Holiday Inn Express in the NE section of DC for our Amtrak Carolinian coach trip to Charlotte, North Carolina.

Leaving Washngton, DC the Gate J sign was excellent with current information and all stops.

Good Internet on this train, "Amtrak Connect", like Pacific Surfliners and other Amtrak Commuter Trains.  I like the train layout, temperature, next station, arrival time, etc.

As we left DC, we passed an office building showing our reflection, reminding me that we were on our first single-level train of this trip around America.

Private boats and construction cranes along the Potomac River.

We could glimpse planes at Ronald Reagan Washington National Airport from the Carolinian.

Potomac River looks is as wide as a lake near Quantico, Virginia

The Potomac gets wider as it reaches Chesapeake Bay

A well-behaved boy plays while mother rests across the aisle from Matt.


The coach car on this train was uncomfortably hot.  To remedy the situation, since we were on this train until 8 pm or later, I took the following steps (and added them to the section of this report called, "Tips for Amtrak Travelers."

How to move from an uncomfortable coach car:

When traveling on in a Coach Car on an Amtrak train when the temperature of your car is to hot (like the Carolinian trip for us), or too cold, or there is a bad odor from a malfunctioning toilet in your car, you can move to another car:

Step 1:  Take a walk through the other cars to see if the situation is better.  While doing this, look for 2 seats together, or one if you are a single traveler.

Step 2:  Return to your seat and get some of your stuff and take it to that open seat and lay it on the seat.  Maybe a newspaper, hat or jacket.  Maybe even put down the tray table so it looks occupied.

Alternative:  If there is no better seat in another car, check the seat checks as you walk through to see if anyone is getting off at the next stop.  If so, be prepared to move to a new seat, with your seat check and your stuff, after the passengers detrain and before new passengers board.


The Young-Sweetser Co. originally occupied this spot – they built the warehouse in 1919 and added the grain elevator tower in 1920. The owner of the surveying company, HGP Inc, bought the place in the early 2000’s and has worked to restore the exterior which included putting a fresh coat of paint on the Purina checkerboard. There aren’t stairs up to the top of the tower – only a ladder.

Janney Marshall Co. is a company that makes Disposable Plates, Cups, Napkins, and Eating Utensils
has 5 to 9 employees and has been in business 146 years!

Lumber mill and drying cone in the flatlands of North Carolina.

Railroad spur off the mainline to Milford Terminal.

Randolph–Macon College is a private, co-educational liberal arts college located in Ashland, Virginia, United States, near the capital city of Richmond. Founded in 1830, the school has an enrollment of more than 1,400 students. The college offers bachelor's degrees in 38 major disciplines in the liberal arts, including political science, business, psychology, biology, international studies, and computer science, as well as 34 minors, including education. Randolph–Macon College is a member of the Annapolis Group of colleges in the United States, as well as the Virginia Foundation for Independent Colleges.

Photography from a train is very interesting.  After taking the photo above along Railroad Avenue in Ashland, Virginia, I enlarged the sign on the front and found that it was called "The Trackside Grill."  With the horse seemingly racing a steam locomotive, I was surprised to find the real

The Trackside Grill, whose name was derived as an intended pun, has nothing to do with the railroad it lies next to, but rather the pictures of local and famous racehorses that line the walls inside. And, "if the walls could talk...", one would learn of all the past businesses it has housed including a bowling ally, a gym, a supply store, several other restaurants, and most notably, the first real movie theater in Ashland, built by Mr. and Mrs. D.H. Covington in 1927. Some local characters, and even our own staff, claim that the restaurant is still haunted!
--From:  http://tracksidegrillva.com/


I took 5 non-overlapping photos of this facility with this many vehicles in each photo.

I love the Internet.  Being a photographer, I was curious about this photo contest so I went on the Internet and found the winning entries and was very impressed with how they displayed the winners around Wilson, North Carolina.  http://www.eyesonmainstreetwilson.com/#/219935/

With an old Railroad Station Sign hanging on a store, Wilson looks depressed.

Perhaps the loss of this industry south of town is one cause for Wilson's demise.

A rusty, small barn with many side doors usually means that it was a barn for drying tobacco.  Tobacco plants are to the right of the barn, but short corn, already tasseled out, means it might be pop corn rather than field corn used for cattle.

A large field of tobacco.  Tobacco in northern states was by allotment, so this big of a field was unusual to me.

Another large tobacco field.  This field was more mature having blossomed out.  In my day they would soon cut it and hand it in the special barns to dry.

Our train made a 90 degree turn to the west at Selma.  As you can see in this view, the track we came down on goes on the east side of the station, we go diagonally to the right with the station inside the triangle that is formed by the tracks.

Selma Union Depot, also known as Selma Union Station, is a train station and museum in Selma, North Carolina. Built in 1924, it is currently served by two Amtrak passenger trains, the Palmetto and the Carolinian. Wikipedia  Complete information about the Selma Station at:  http://www.greatamericanstations.com/Stations/SSM

Aerial view of the Selma Station.  The Carolinian stopped on the curved track.

Identical platform foof on the west side of the station.

This young man in Cary, North Carolina doesn't like the horn on our Carolinian train.

This vintage Durham, North Carolina building has been many things, and Tobacco was involved in the lineage.

A familiar name even to a non-smoker.


This Norfolk & Western caboose was given to the City of Burlington by Norfolk Southern Railway in 1993. It is symbolic of the railroad roots of the North Carolina Railroad town of Company Shops (1866) which became Burlington in 1893. The caboose was painstakingly restored in 2006-2007 and is now a museum depicting life aboard a train as it was when a caboose rolled behind every freight.

Top of this page

Back to the Table of Contents of "America by Amtrak"